ICYMI: The U.S. solar industry has been on the edge of their seats for months awaiting Trump’s decision on the 201 Solar Trade Case, in which two foreign-based solar manufacturers have requested tariffs on solar PV panels imported from other nations to protect domestically manufactured panels.

His decision was released Monday with recommendations for a 30% protective tariff on solar panel imports with an exception for the first 2.5 gigawatts of imported panels. This tariff will step down 5 percent each year for the next four years. 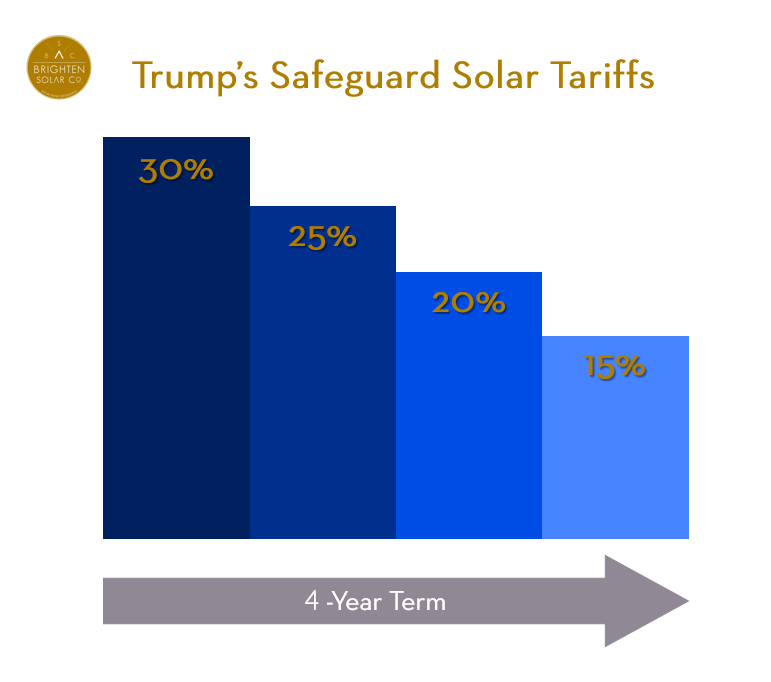 These tariffs will apply to all solar PV imports after an exempted first 3.5 gigawatts.

This ruling has many implications for the solar industry in the United States, as the overall cost of installations are expected to increase, which may discourage home and business owners from going solar. This will affect thousands of jobs across the nation, as this industry has been growing seventeen times faster than the rest of the U.S. economy. Solar also employs a more diverse group of backgrounds and skills than other similar industries.

Overall, this news was more or less expected: Trump has made propping up the dying coal and fossil fuel industries a centerpiece of his platform, as well as discouraging foreign trade. His short-sighted “America-first” approach to this decision will unfortunately cause more harm to the American economy than good.

Solar energy has already (and quickly) taken a foothold in the nation’s energy matrix and will continue to grow, even if that growth is hindered in these next few years. Americans will continue to choose solar not just for the financial benefits, but because they are investing in a cleaner future for their families and their country.

Several cities and states have made bold commitments for renewable energy and will stick to them. This includes our very own state of California and Brighten Solar Co’s town of Goleta.

Let’s not get discouraged; let’s show this administration that solar is part of America’s future.

Why home battery makers are moving away from Cobalt, and why you should too.